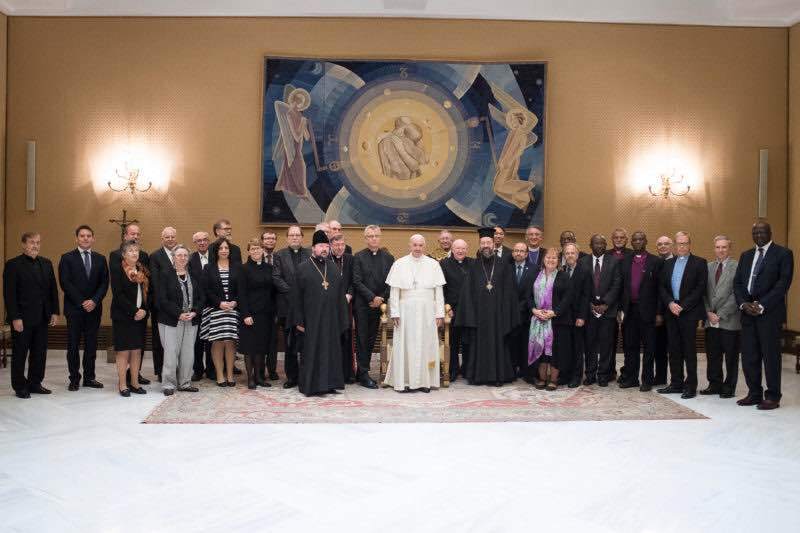 Between October 11-13, 2016, the annual conference of Secretaries of Christian World Communions met in Rome where the participants were able to inform one another about “important events of their Church or confession and to give an update on the bilateral dialogues in which they are all involved.” 1http://www.ecupatria.org/2016/10/14/conference-of-secretaries-of-christian-world-communions/ It is not surprising that this “unformal ecumenical forum” which was formed in 1957, also had an audience with Pope Francis. 2ibid.

It is not surprising the pope’s message was one to promote ecumenism. CRUX, a Catholic news website, reports that Francis has “gone on to lead a distinctly ecumenical papacy” 4https://cruxnow.com/church/2016/01/25/francis-proving-to-be-a-very-ecumenical-pope/ and “two of Pope Francis’ most ardent priorities are environmental protection and Christian unity.” 5https://cruxnow.com/church/2015/09/02/pope-francis-blends-environmental-ecumenical-agendas-in-day-of-prayer/

So what does this have to do with Seventh-day Adventists? According to the Adventist News Network, for the past 46 years, the Secretary-General of the Secretaries of the Christian World Communions has been a Seventh-day Adventist. 6http://news.eud.adventist.org/en/all-news/news/go/2014-12-02/adventist-leader-new-secretary-general-of-the-christian-world-communions/

Between 1970 and 2003, Dr. Bert B. Beach was Secretary-General. As a representative for the General Conference, it is a documented fact that, on behalf of the Seventh-day Adventist Church, Beach gave the pope a gold medal in 1977. 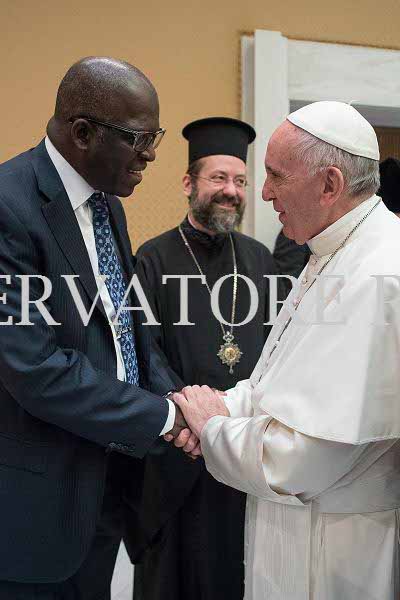 The Adventist News Network reported, “The Conference of Secretaries represents about two billion Christians and covers more churches than any other organization.” It argues that this organization “isn't a [sic] ecumenical movement” and its “purpose is not to build the visible unity of the Christian family.” 7ibid.

Clearly, this description is not correct. According to Wikipedia, “The Conference of Secretaries of World Christian Communions is an international ecumenical organization with annual meetings.” 8https://en.wikipedia.org/wiki/Conference_of_Secretaries_of_World_Christian_Communions

Those present at this year’s ecumenical meeting, include: “the Anglican Communion, the Baptist World Alliance, the Disciples Ecumenical Consultative Council, the Ecumenical Patriarchate, the Friends World Committee for Consultation, the General Conference of Seventh-day Adventists, the Global Christian Forum, the Lutheran World Federation, the Mennonite World Conference, the Moravian Church, the Organization of African Instituted Churches, the Pentecostals, the Roman Catholic Church, the Russian Orthodox Church, the Union of Utrecht (Old Catholics), the World Communion of Reformed Churches, the World Convention of Churches of Christ, the World Council of Churches, the World Evangelical Alliance and the World Methodist Council.” 9http://www.ecupatria.org/2016/10/14/conference-of-secretaries-of-christian-world-communions/

We need to ask ourselves, how can Seventh-day Adventists preach the three angels’ messages and call people out of Babylon when at the same time they are uniting with Babylon? How can they teach people the pope is the antichrist when they allow themselves to be addressed by the pope who says, “And I walk with Jesus, not with my Jesus against your Jesus, but with our Jesus”? 10http://m.vatican.va/content/francescomobile/it/speeches/2016/october/documents/papa-francesco_20161012_christian-world-communions.html The truth is that the Jesus the pope walks with is not the same Jesus we are to walk with.

Martin Luther had a clear understanding of this. In the book, The Great Controversy, we read: “When the papal bull reached Luther, he said: ‘I despise and attack it, as impious, false. ... It is Christ Himself who is condemned therein. ... I rejoice in having to bear such ills for the best of causes. Already I feel greater liberty in my heart; for at last I know that the pope is antichrist, and that his throne is that of Satan himself.’ ” -d'Aubigné, B. 6, Ch. 9. 11Ellen G. White, The Great Controversy (1911), p. 141

The reformers were not afraid to proclaim the truth about the pope and the papacy, even at the peril of their lives. Today, however, Protestantism has changed. One hundred years ago, God’s messenger could write:

“But Romanism as a system is no more in harmony with the gospel of Christ now than at any former period in her history. The Protestant churches are in great darkness, or they would discern the signs of the times. The Roman Church is far-reaching in her plans and modes of operation. She is employing every device to extend her influence and increase her power in preparation for a fierce and determined conflict to regain control of the world, to re-establish persecution, and to undo all that Protestantism has done. Catholicism is gaining ground upon every side. See the increasing number of her churches and chapels in Protestant countries. Look at the popularity of her colleges and seminaries in America, so widely patronized by Protestants. Look at the growth of ritualism in England and the frequent defections to the ranks of the Catholics. These things should awaken the anxiety of all who prize the pure principles of the gospel. Protestants have tampered with and patronized popery; they have made compromises and concessions which papists themselves are surprised to see and fail to understand. Men are closing their eyes to the real character of Romanism and the dangers to be apprehended from her supremacy. The people need to be aroused to resist the advances of this most dangerous foe to civil and religious liberty.” 12Ellen G. White, The Great Controversy (1911), pp. 565-566

Not only are the Protestant churches in great darkness, but the majority of Seventh-day Adventists also demonstrates that they are unable to discern the signs of the times.

We can be encouraged because God is waking up His faithful people to discern the meaning of current events, as well as to prepare them for what will soon take place.