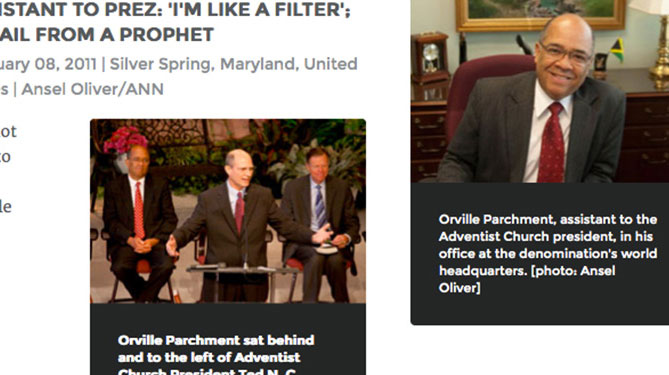 The following was included in a March 24, 2011 Adventist Review article written by Ansel Oliver, assistant director for news, General Conference of Seventh-day Adventists:

Six months ago a person claiming to be a prophet wanted to share something with Wilson. Another person wanted to tell Wilson some reoccurring dreams they had.
"I say to myself, if I were living in [church co-founder] Ellen White's day and she wrote a letter like that to me, would I respond to her," Parchment said. "It does cross my mind. I hope I'm not putting off God by politely turning these people down."

[Note: Wilson mentioned above refers to the president of the General Conference. Parchment is the assistant to Wilson.]
http://news.adventist.org/en/archive/articles/2011/02/08/parchment-man-of-laughs-helps-adventist-president-with-big-picture-details

1 Thessalonians 5:19-21
Quench not the Spirit. Despise not prophesyings. Prove all things; hold fast that which is good.

Counsels on Sabbath School Work, p. 28
Precious light is to shine forth from the word of God, and let no one presume to dictate what shall or what shall not be brought before the people in the messages of enlightenment that He shall send, and so quench the Spirit of God. Whatever may be his position of authority, no one has a right to shut away the light from the people. When a message comes in the name of the Lord to His people, no one may excuse himself from an investigation of its claims. No one can afford to stand back in an attitude of indifference and self-confidence, and say: "I know what is truth. I am satisfied with my position. I have set my stakes, and I will not be moved away from my position, whatever may come. I will not listen to the message of this messenger; for I know that it cannot be truth." It is from pursuing this very course that the popular churches were left in partial darkness, and that is why the messages of heaven have not reached them.

Ibid., p. 32
When new light is presented to the church, it is perilous to shut yourselves away from it. Refusing to hear because you are prejudiced against the message to the messenger will not make your case excusable before God. To condemn that which you have not heard and do not understand will not exalt your wisdom in the eyes of those who are candid in their investigations of truth. And to speak with contempt of those whom God has sent with a message of truth, is folly and madness.

The Signs of the Times, May 26, 1890
Much has been lost because our ministers and people have concluded that we have had all the truth essential for us as a people; but such a conclusion is erroneous and in harmony with the deceptions of Satan; for truth will be constantly unfolding.

Christ’s Object Lessons, pp. 127-128
In every age there is a new development of truth, a message of God to the people of that generation. The old truths are all essential; new truth is not independent of the old, but an unfolding of it. It is only as the old truths are understood that we can comprehend the new. When Christ desired to open to His disciples the truth of His resurrection, He began "at Moses and all the prophets" and "expounded unto them in all the scriptures the things concerning Himself." Luke 24:27. But it is the light which shines in the fresh unfolding of truth that glorifies the old. He who rejects or neglects the new does not really possess the old. For him it loses its vital power and becomes but a lifeless form.

Life Sketches, pp. 325-326
"What reserve power has the Lord with which to reach those who have cast aside His warnings and reproofs, and have accredited the Testimonies of the Spirit of God to no higher source that human wisdom? In the judgment, what can you who have done this, offer to God as an excuse for turning from the evidences He has given you that God was in the work? 'By their fruits ye shall know them.' I would not now rehearse before you the evidences given in the past two years of the dealings of God by His chosen servants; but the present evidence of His working is revealed to you, and you are now under obligation to believe. You cannot neglect God's messages of warning, you cannot reject them or treat them lightly, but at the peril of infinite loss.

"Caviling, ridicule, and misrepresentation can be indulged in only at the expense of the debasement of your own souls. The use of such weapons does not gain precious victories for you, but rather cheapens the mind, and separates the soul from God. Sacred things are brought down to the level of the common, and a condition of things is created that pleases the prince of darkness, and grieves away the Spirit of God. Caviling and criticism leave the soul as devoid of the dew of grace as the hills of Gilboa were destitute of rain. Confidence cannot be placed in the judgment of those who indulge in ridicule and misrepresentation. No weight can be attached to their advice or resolutions. You must bear the divine credentials before you make decided movements to shape the working of God's cause.
"To accuse and criticize those whom God is using, is to accuse and criticize the Lord, who has sent them. All need to cultivate their religious faculties, that they may have aright discernment of religious things. Some have failed to distinguish between pure gold and mere glitter, between the substance and the shadow.
"There has been a departure from God among us, and the zealous work of repentance and return to our first love essential to restoration to God and regeneration of heart, has not yet been done. Infidelity has been making its inroads into our ranks; for it is the fashion to depart from Christ, and give place to skepticism. With many the cry of the heart has been, 'We will not have this man to reign over us.' Baal, Baal, is the choice. The religion of many among us will be the religion of apostate Israel, because they love their own way, and forsake the way of the Lord. The true religion, the only religion of the Bible, that teaches forgiveness only through the merits of a crucified and risen Saviour, that advocates righteousness by the faith of the Son of God, has been slighted, spoken against, ridiculed, and rejected. It has been denounced as leading to enthusiasm and fanaticism. But it is the life of Jesus Christ in the soul, it is the active principle of love imparted by the Holy Spirit, that alone will make the soul fruitful unto good works. The love of Christ is the force and power of every message for God that ever fell from human lips. What kind of a future is before us, if we shall fail to come into the unity of the faith?

Conclusion:
Parchment wonders if he would have responded to a letter from Ellen White and hopes that he is not putting off God by turning down those who state they are having dreams from the Lord. Why would a person take the chance of “putting off God”? Yes, there are false prophets in the last days. However, the Bible says to “prove all things” so that we do not make the mistake of rejecting progressive light from heaven as Seventh-day Adventists did in 1888. Anyone who rejects that light is on very dangerous ground.