We use cookies to give you the best online experience. By using our website you agree to our use of cookies in accordance with our cookie policy. Learn more here
DREAMS MENU
Volume 1
Volume 2
Volume 3
Volume 4
Volume 5
Volume 6
You are here: Home / Dreams / 59. The Lord's Prayer

In my dream, I observe a man tying his shoes. An angel, who is not the Herald, calls me by my heavenly name and tells me to notice what the man does. After tying his shoes, he stands up and his wife enters the room. She reminds him that their car’s fuel tank is almost empty and gives him $10.00 to purchase gasoline for the car, since they will need the car for Sabbath. He places the money in his pocket and gets ready to go out and do errands. They stop to pray together before he leaves for a short while.

He says a simple prayer spoken from the heart, as if he were kneeling in front of God at His throne. He asks for protective angels to watch over them both as they do God’s will. He asks for God’s protection over his wife while they are apart and for angels to protect him on the road. I understand that it is their custom to pray when they are apart from each other, even for a short time. They rise and he tells her he will be back soon. She tells him to go with the angels. 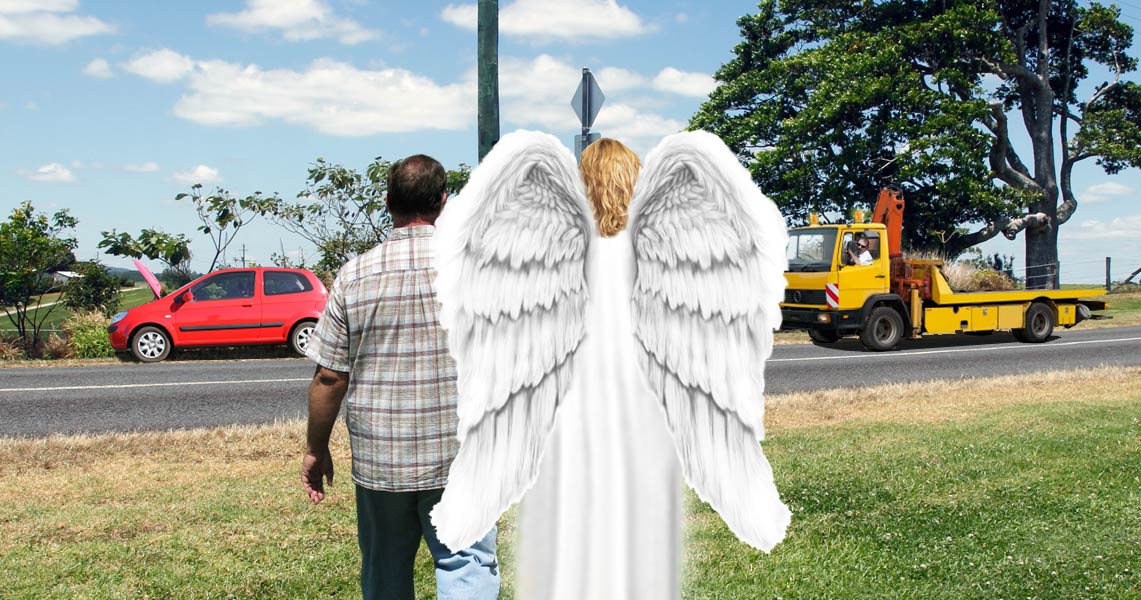 He gets in the car, begins his list of errands, and soon forgets to put fuel in the almost empty tank. As the angel and I observe, we notice he is now on a country road that is not often traveled. His car stops running and he realizes it is out of fuel. He now remembers about the need to fill the tank. Looking up in his rear view mirror, he sees a tow truck with yellow lights flashing. He gets out of his car to greet the tow truck man who is now walking toward his car. The tow truck driver asks if he is having car trouble, and the man explains that it ran out of gasoline. The angel and I listen and observe from the other side of the road, but we are not seen. 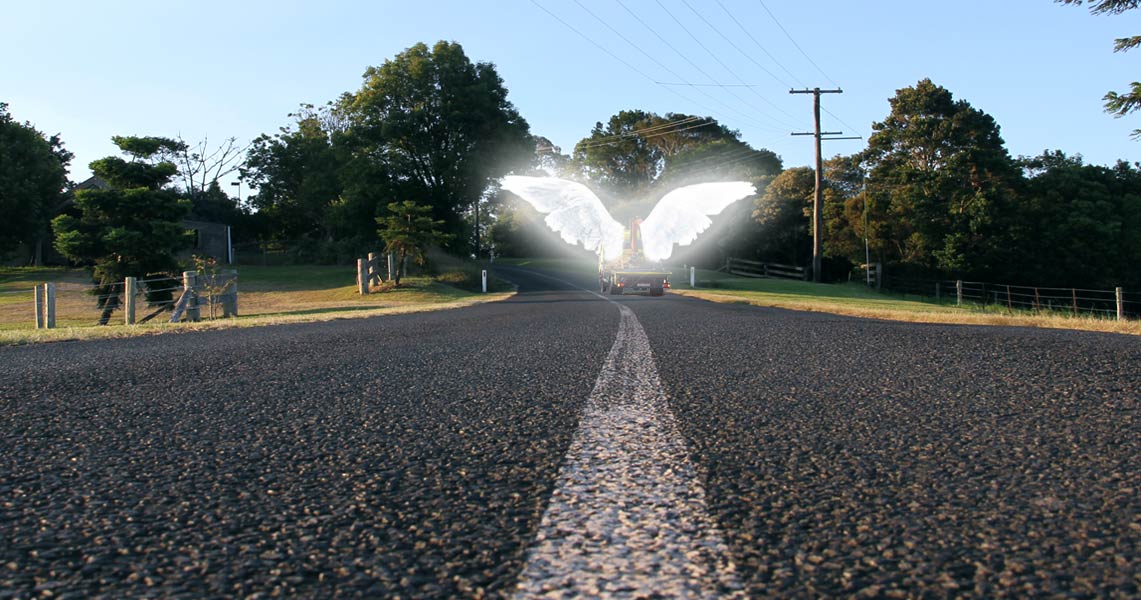 The tow truck driver tells the man that he has fuel for his car. The driver goes to the back of his truck and lifts a five-gallon gasoline can out of the back. He then pours the fuel into the car’s tank. When he is done, he tells the man that his car will start now and to have a great day. The man replies, “But I have not paid you for the fuel. All I have is a $10.00 bill, and you have put about $20.00 worth of fuel into my car.” The driver explains that he does not need any money and advises him to give it to someone who is doing God’s work. He opens the man’s car door and suggests that the man start the car. The man gets in, turns the ignition, and the car starts. The tow truck driver smiles at the man and says, “God bless. Go with the angels.” The man in the car smiles, thinking that is what his wife says. He drives away, and the tow truck driver walks back to the truck. Standing next to the truck door, he looks over at us and waves. The angel with me smiles and waves back. Now we watch as the truck slowly disappears and the driver becomes an angel. He looks up and quickly streaks across the sky.

I am now crying from what I have just seen. The angel tells me that when we pray for the protection of angels, God will send their help, if it is His will. He says that it is a very special honor and privilege to be able to speak directly to the heavenly Father, because of what Jesus did for us.

The angel now takes me to the same classroom I have been in before. There is one chair for me to sit in, and the angel stands in front of what looks like a whiteboard. He shares how he has been sent to instruct on how Jesus prayed. He begins by explaining about the disciples asking Jesus to teach them how to pray. He reveals how many have forgotten how to pray, and that, sadly, many do not even take advantage of the honor and privilege of talking to their heavenly Father. Many go their whole lifetime without praying.

As the angel speaks, I see words appear on the whiteboard behind him. Notice the prayer as it was given: “Our Father which art in heaven, hallowed be thy name. Thy kingdom come. Thy will be done in earth, as it is in heaven. Give us this day our daily bread. And forgive us our debts, as we forgive our debtors. And lead us not into temptation, but deliver us from evil: For thine is the kingdom, and the power, and the glory, for ever. Amen.” [Matthew 6:9-13]1Signs of the Times, October 28, 1903 It is of the utmost importance that we understand how to pray aright. A careful study of the prayer that Jesus gave His disciples will be of great benefit to us.

Jesus then says, “Hallowed be thy name.” Jesus shows that when we speak to the Father, it should be a sacred and reverent time, and that our thoughts and words should show respect, since the Father is holy and deserves respect.

Then Jesus prays, “Thy kingdom come.” Here Jesus refers to the time when the Father will come with His kingdom, and sin will be no more. The earth will be made new, and the great city will rest on the new earth.

Next Jesus says, “Thy will be done in earth, as it is in heaven.” Jesus is asking that the Father’s will, His directions, His requests and petitions be done here on this earth as they are in heaven.

Jesus shows how we are to pray, “And forgive us our debts, as we forgive our debtors.” This explains the importance of asking forgiveness for our sins, and that we are to forgive those who have wronged us. How can we expect the Father to forgive us if we are unable to forgive those who have sinned against us? If we have loaned money to someone and they are unable to pay it back, we are to forgive the debt. How can we expect the Father to give freely to us when we do not forgive the debts of others? Once we have done this, we can kneel with a clear conscience to ask the Father’s forgiveness of our own sins.

Next Jesus prays, “And lead us not into temptation, but deliver us from evil.” Jesus says that each individual who walks the path as a sinner should ask to be kept on the path, without giving into temptation. He shows the importance of asking the Father to attend each one on their daily walk, because Satan will send temptations during the day. Daily, we are to ask for the direction of the Father, so that the path we walk will be protected by the guardians of the holy pathway.

The angel tells me that many do not pay close attention in the next part to how Jesus ends his prayer by saying, “For thine is the kingdom, and the power, and the glory, for ever.” When Jesus says this, it also refers to the Godhead. In the same way He instructed, “Go ye therefore, and teach all nations, baptizing them in the name of the Father, and of the Son, and of the Holy Ghost,” Jesus speaks of the kingdom being the Father’s throne, the power being the Holy Spirit, and the glory being the Son of God.

Notice that Jesus showed that there should not be a constant repetition of the Father’s name in prayer. It is similar to someone speaking to a friend and saying his name in every sentence. Some have the habit of repeating His name needlessly. This is not to be done, and by taking the Father’s name in vain, the one praying is guilty of breaking the third commandment. His name should be spoken with thought, care, and reverence.2Education, p. 243 Reverence should be shown also for the name of God. Never should that name be spoken lightly or thoughtlessly. Even in prayer its frequent or needless repetition should be avoided. "Holy and reverend is His name." Psalm 111:9. Angels, as they speak it, veil their faces. With what reverence should we, who are fallen and sinful, take it upon our lips!

Notice that the Lord’s prayer is short and states exactly what is to be addressed. There is no need for long prayers. Yet, in private there are times when we can approach the Father with a longer prayer. Generally, however, this is not to be done when praying in public.3Testimonies for the Church, Vol. 2, p. 578 In private prayer all have the privilege of praying as long as they desire and of being as explicit as they please. They can pray for all their relatives and friends. The closet is the place to tell all their private difficulties, and trials, and temptations. A common meeting to worship God is not the place to open the privacies of the heart. Evangelism, p. 146 The prayers offered in public should be short and to the point. God does not require us to make the season of worship tedious by lengthy petitions. . . . A few minutes is long enough for any ordinary public petition. The Review and Herald, January 14, 1902 It is generally the case that the less of heaven's vitality there is in a prayer, the more lengthy it is. Do not spend a long time in prayer before a congregation unless you know that God is inditing [composing] the prayer. Let the prayers made in public be short and full of earnestness. The effectual, fervent prayer of a righteous man availeth much; but the prayer uttered in a low, monotonous tone and spiritless manner is not accepted by God. The voice of prayer should rise to God from hearts burdened by a sense of need. Let there be a revival of the Holy Spirit, that your prayers may be filled with the power of heaven.

We are each privileged to personally speak to the heavenly Father. While each prayer spoken is heard by the Father, if it is not a sincere prayer from the heart, He will not answer. When we pray correctly, He will answer, but it may not always be in the way we would like.

Each prayer sent to the Father should always end in the name of Jesus. He is the reason that we can have the privilege of approaching the Father in prayer. Nevertheless, so many squander away the most blessed privilege of prayer.