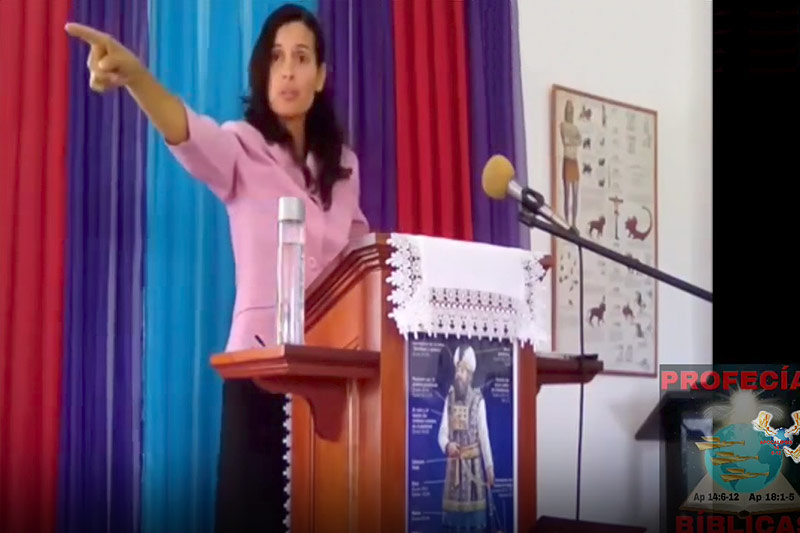 Towards the end of July 2017, God gave pastor Ernie Knoll a dream telling him that none of the messages preached by Daisy Escalante have come from His throne.

Soon after, Pastor Knoll and an assistant spoke with her and her husband by phone. After mentioning several details that show that the messages she has received are false, pastor Knoll begged her in the name of Jesus to stop publicizing her messages. We do not know whether she will do that or not.

The enemy has given Daisy Escalante some truths, but he has also included some subtle errors. By those errors (which may appear insignificant) he hopes to deceive many. Those who do not discern small errors will find it easier to accept other, greater errors.

It is very important to remember that messages from God cannot contain any error. God does not mix error with truth. Therefore, it is not advisable to share or listen to what she preaches.

The enemy is determined to mix error with truth. Testimonies for the Church, Vol. 8, p. 184

The path of error often appears to lie close to the path of truth. It is hardly distinguishable from the path that leads to holiness and heaven. But the mind enlightened by the Holy Spirit may discern that it is diverging from the right way. After a while the two are seen to be widely separated. Counsels for the Church, p. 322

Many apparently good things will need to be carefully considered with much prayer, for they are specious devices of the enemy to lead souls in a path which lies so close to the path of truth that it will be scarcely distinguishable from it. But the eye of faith may discern that it is diverging, though almost imperceptibly, from the right path. … Satan perverts and misquotes Scripture … Evangelism, p. 590, 591

Here are some examples:

Beloved, believe not every spirit, but try the spirits whether they are of God: because many false prophets are gone out into the world. 1 John 4:1

In the name of Jesus Christ whose blood was shed for all who will believe in Him and have everlasting life, I command you to not say a word but depart and never return to me.” From the dream, “Regarding Angels.”

There are those who say that nothing, not even insects, should be killed. God has not entrusted any such message to his people. It is possible to stretch the command “Thou shalt not kill” to any limit; but it is not according to sound reasoning to do this. Those who do it have not learned in the school of Christ.

This earth has been cursed because of sin, and in these last days vermin of every kind will multiply. These pests must be killed, or they will annoy and torment and even kill us, and destroy the work of our hands and the fruit of our land. In places there are ants [termites] which entirely destroy the woodwork of houses. Should not these be destroyed? Fruit trees must be sprayed, that the insects which would spoil the fruit may be killed. God has given us a part to act, and this part we must act with faithfulness. Then we can leave the rest with the Lord.

God has given no man the message, Kill not ant or flea or moth. Troublesome and harmful insects and reptiles we must guard against and destroy, to preserve ourselves and our possessions from harm. And even if we do our best to exterminate these pests, they will still multiply. Selected Messages, Vol. 3, p. 329

As the siege of Jerusalem by the Roman armies was the signal for flight to the Judean Christians, so the assumption of power on the part of our nation, in the decree enforcing the papal sabbath, will be a warning to us. It will then be time to leave the large cities, preparatory to leaving the smaller ones for retired homes in secluded places among the mountains. Last Day Events, p. 121

Anything that will make a stir, create an excitement on a wrong basis, is to be dreaded, for the reaction will surely come. Last Day Events, p. 3

Follow the customs in dress so far as they conform to health principles. Let our sisters dress plainly, as many do, having the dress of good, durable material, appropriate for this age, and let not the dress question fill the mind. Our sisters should dress with simplicity. Child Guidance, p. 414

Those who have listened to the messages given by Daisy Escalante will doubtlessly have noticed other errors. We must remember that the messages God sends cannot contain EVEN ONE ERROR, because God is perfect, and all He does is perfect.

That is why we must examine each message carefully, including the messages given by pastor Knoll, to be sure that they come from heaven and are not a subtle deception of the enemy. Satan will use his amazing mind—much more powerful than our brains—to mislead everyone he can and, if possible, deceive even the very elect.

As we evaluate all messages, may God help us to pray much, ask for the leading of the Holy Spirit, and be watchful. Let us read and learn Isaiah 28:10, 2 Timothy 2:15, and 1 Thessalonians 5:19-21. Then, we must decide whether to believe them or not, based on the weight of evidence.